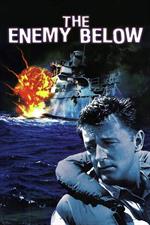 THE ENEMY BELOW (1957) is a war adventure film , which tells the story of the battle between an American destroyer escort and a German U-boat during World War II. Produced and directed by acclaimed actor, Dick Powell, the movie stars Robert Mitchum and Curt Jürgens as the American and German commanding officers, engaged in a prolonged and deadly battle of wits that tests both men and their crews. Each man grows to respect his opponent.The film was based on the 1956 novel by Denys Rayner, a British naval officer involved in anti-submarine warfare throughout the Battle of the Atlantic.

The film’s destroyer escort USS Haynes (DE-181) was represented by the USS Whitehurst, filmed in the Pacific Ocean near Oahu, Hawaii. Many of Whitehurst’s crewmen acted in the film; the phone talkers, the gun and depth charge crews,  and all of the men seen abandoning ship were real Whitehurst crewmen.