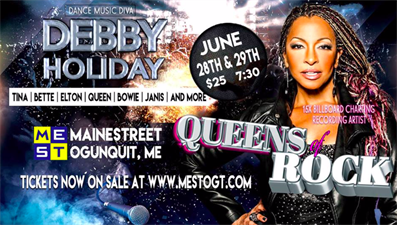 Debby Holiday is an International singer/songwriter with 15 Billboard Top 20 Dance Music Hits, including
her latest hit “Waiting For A Lifetime” (an Equality chant) which soared to #7 in Dec, 2018.
Debby Holiday broke onto the dance scene with her #5 Billboard summer anthem Dive in 2004. Holiday
followed the smash hit Dive with her power ballad Half A Mile Away, which shot into the Billboard Top 10,
along with Debby's follow-up dance hit Bring It On.
All of Debby’s subsequent dance singles broke into the Billboard Top 20 including, Piece of My Love &
Surrender Me (with the incredible Tony Moran), Joyful Sound, featured in the hit show Sordid Lives: The
Series, from writer/director/producer Del Shores, starring Olivia Newton John.
Debby experienced every aspect of the music industry early on while growing up in Los Angeles, Ca. Her
father Jimmy Holiday was a passionate and soulful artist, topping the charts with several of his own singles
before going on to co-write such hits as Understanding by Ray Charles and Jackie DeShannon’s Put A
Little Love In Your Heart. Another standard All I Ever Need Is You, turned out to not only be a top 10 single
for Sonny and Cher – but also went on to be a huge country hit for Kenny Rogers and Dottie West.
Naturally, this eclectic mix of music strongly influenced Debby’s own unique and compelling sound.
Debby has written with a wide range of today’s top songwriters including Jeffrey Steele, Al Anderson,
Marty Fredrickson, Billy Steinberg, Erik Brazillian and Clif Magness (Avril Levigne). Debby has shared
the stage with legendary recording artists like Rod Stewart, Joe Walsh, John Waite and Kiss, appearing on
several television programs including The View and The David Letterman Show.
Debby starred in the film Blues For Willadean (2012) written by the award winning, Del Shores & co-
starring Beth Grant, Oscar Winner Octavia Spencer from The Help.