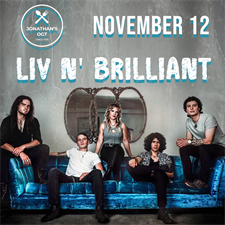 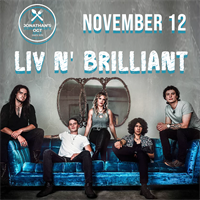 Liv N' Brilliant boasts a well-defined musical precept:  Keep rock music alive. One listen to this energetic group of young musicians and you will believe that it never even skipped a heartbeat. Hailing from southern Maine, this dynamic fellowship of five strives to re-energize the musical landscape of today. The pure passion with which they play not only showcases their distinct blend of modern roots-rock blues, it creates more momentum than a meteorite.

The beginnings of Liv N’ Brilliant began when Liv Lorusso and Jordon Brilliant met at Bentley’s Saloon in Arundel, ME. Liv Lorusso got her start as a performer during a chance encounter with the James Montgomery Blues Band. Over the past 5 years, she has shared the stage with blues legends such as James Montgomery, John Butcher Axis, Paul Nelson, and Buddy Guy.

Jordon Brilliant was born in the great state of Texas, and grew up in the live music capital of the world. Jordon majored in guitar in college and put those skills to use in the new england music scene. Since he moved to maine in 2016, he has shared the stage with James Montgomery, Paul Nelson, Barry Goudreau, John Butcher Axis, and many more.

Searching for a singer that could sit atop Liv N’ Brilliant’s high energy sound, they set their sights on the irrepressible Sam Vlasich. Initially an aspiring filmmaker from York, Maine, Sam’s teen years rolled those credits and began production on the idea of singing and performing for the masses instead - with which he fell ass-over-apple-cart in love.

He started gigging with various bands, absorbing the aura of rock n’ roll greats such as AC/DC, Aerosmith, Humble Pie, and Led Zeppelin - which he’s carefully cultivated into his own distinctive presence. Sam eventually found himself fronting a popular NH-based band called Red Sky Mary for the better part of a decade. RSM has shared the stage with the likes of LA Guns, Bad Company, Greta Van Fleet, Lynyrd Skynyrd, and many more.
They say good things come with time, and that has been proven with the final addition of Harrison Foti and Brad Hartwick as the dynamic-duo rhythm section. Harrison began playing drums at the ripe age of two and hasn’t put down the sticks since. His passion for playing Rock N’ Roll music shines through with every performance.

“I could have been anything and I became a bass player? Really?” -Brad Hartwick

Growing up in the NH music scene, Harrison and Brad got their licks playing in former band, Victim of Circumstance, and current band River Sang Wild. They have shared the stage with the likes of Blue Oyster Cult, Puddle of Mudd, Warrant, and many others.

Inspired by scores of legacy influencers and brand-name rock bands - including Aerosmith, The Rolling Stones, The Black Crowes, and Guns N’ Roses to name a few - Liv N' Brilliant are determined to establish themselves as a driving force in the music industry. Armed with a repertoire of well-orchestrated, original rock songs complimented by their sophisticated blend of bluesy swagger and groove, LNB tops their timeless talent with a stellar stage presence.

This event held inside in our Upstairs Listening Room. 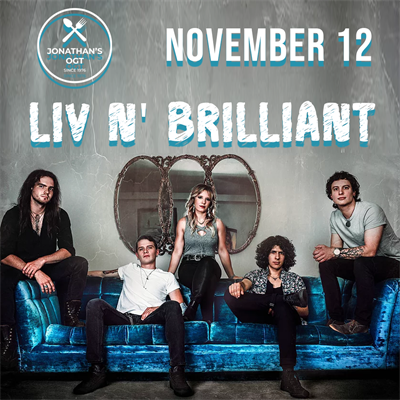 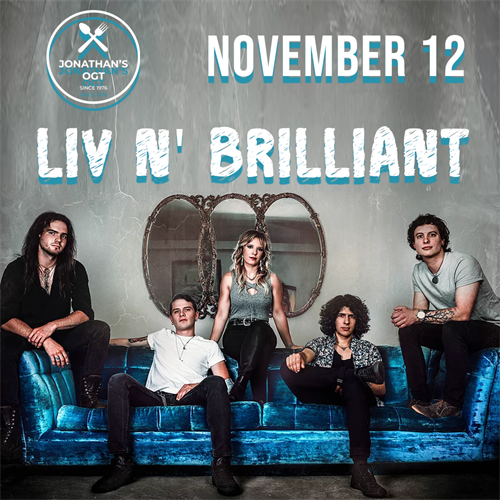